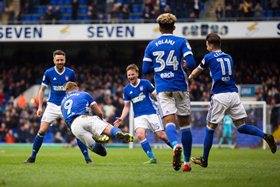 Australian-born Nigerian striker Ben Folami, 18,  has made his first Championship appearance for Ipswich Town, whom he joined as a scholar in 2015 from Sutherland Sharks.

Ipswich Town manager Mick McCarthy handed Folami his league debut in their EFL Championship clash against Millwall (2-2) at Portman Road when he came on at the break as replacement for Myles Kenlock.

The Blues were back on level terms in the 52nd minute after a goalmouth scramble and the goal was initially credited to the Nigerian teenager but what would have been his first for the first team was later chalked off, with the stats gurus at OPTA awarding it to Martyn Waghorn.

Folami made his first team debut for Ipswich Town in their 2-1 loss to Crystal Palace in the League Cup on August 22, 2017 and four days later he was an unused substitute in the league against Fulham.

He is on the brink of earning a full promotion to the Tractor Boys first-team after a string of fine displays for the youth team in the Professional Development League 2 and Premier League Cup.

Apart from the aforementioned clubs, Folami previously represented Football NSW Institute in his country of birth.