...the complete Nigerian football portal
Subscribe
Wolfsburg Sweat On Fitness Of Felix Uduokhai Ahead Of Trip To Freiburg
Published: April 03, 2018 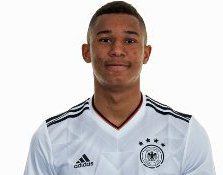 Wolfsburg are sweating on the fitness of Nigeria Football Federation target Ohis Felix Uduokhai ahead of their trip to Schwarzwald-Stadion, where they face Freiburg on game week 29 in the German Bundesliga.

The Germany youth international has not featured in a competitive match for the Wolves since January 20, 2018.

Uduokhai missed seven straight games in the Bundesliga due to a knee injury but returned to the match day squad against FC Schalke 04, a game in which he was an unused substitute.

Though the defender failed a fitness test before the meeting against Hertha BSC this past weekend, sporting director Olaf Rebbe thinks his injury will not keep him on the sidelines for a long period.

This season, Uduokhai has found the net three times in 19 outings for Wolfsburg in all competitions.