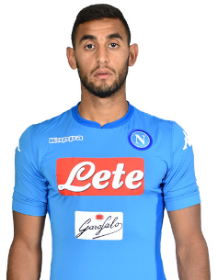 Manchester United manager, Jose Mourinho is poised to make a sensational move for Napoli defender, Faouzi Ghoulam as a replacement for Chelsea target, Luke Shaw in the summer.

In a revelation on Daily Mail, the Red Devils gaffer has earmarked the Algerian as a viable replacement for his inconsistent left back who is attracting attention from their league rivals, Chelsea.

Ghoulam has established himself as one of the best full backs in Italian football and having put pen to paper on a new long-term deal with the Partenopei as recently as December 2017.

The Serie A club would demand a substantial sum for their player as Pep Guardiola's Manchester City are also in the running for his signature.

A £26 million bid has been mooted for the deal though that could increase if it turns a bidding war between interested parties, with the 2017 Algerian Footballer Of The Year having a release clause as high as £52million inserted into his latest contract.

Manchester United are also considering other options from the Premier League should the Ghoulam deal not pull off, with Tottenham's Danny Rose another option which could equally see Shaw go the other way.