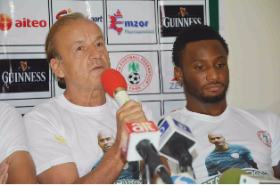 Allnigeriasoccer.com can exclusively report that Super Eagles manager Gernot Rohr may be involved in some underhand dealings that will jeopardize the chances of the national team performing well at the 2018 World Cup.

The German is imitating Nigeria 1994 World Cup coach Clemens Westerhof, who forced Emmanuel Amuneke to sign for Duisburg and coerced Daniel Amokachi to join Club Brugge over Anderlecht who were also interested in his services.

There are rumours that Rohr has joined forces with DW Sports Management to force Super Eagles players to sign representative agreements with the French-based agency or be omitted from the roster for the World Cup.

It is confirmed that Rohr visited Ahmed Musa and Moses Simon in Russia and Belgium respectively and few months later the two wingers joined the stable of DW Sports Management.

This website can confirm one hundred percent that the Gent winger was financially induced by DW Sports Management before he penned the representation contract and will pocket a percentage of the commission if he joins a new club after leaving Belgium and this is a breach of Fifa's rules banning third parties from influencing the transfer of players.

Bursaspor defender William Troost-Ekong was also approached to join DW Sports Management but he refused their overtures despite Rohr surprisingly handing him the captain's armband against Poland last month in a pre-World Cup friendly.

English-based agent Tony Harris influenced the naming of Reuben Gabriel, Michael Uchebo, Ahmed Musa and Uche Nwofor in Nigeria's 2014 World Cup squad and the national team lacked a quality bench in the mundial, they struggled to qualify for the last sixteen before they were eliminated.

In the light of the foregoing, Rohr and DW Sports Management's antics will affect the Super Eagles performance in Russia if they are not cautioned by the Nigerian Federation.