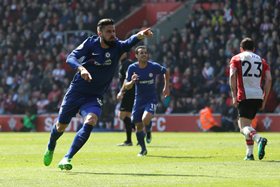 Chelsea pulled off a thrilling comeback after earlier going two goals down to Southampton in their Premier League clash at the St Mary's on Saturday afternoon, going on to win 3-2 thanks to goals from Olivier Giroud and Eden Hazard.

Victor Moses was named among the substitutes for Chelsea while promoted Saints youngster, Michael Obafemi was not in Southampton matchday squad after going the distance for their youth side yesterday.

An opening goal from Serbian attacker, Dusan Tadic after 21 minutes put Southampton in front following a Ryan Bertrand cross and Jan Bednarek added another on the hour mark after he cushioned another brilliant effort past Thibaut Courtois in the Chelsea goal.

But Chelsea came roaring back to 3-2 in the space of eight minutes in the second period, substitute striker, Olivier Giroud kick-starting the comeback with a textbook header down into the bottom corner in the 70th minute before Eden Hazard pulled the Blues level five minutes later.

The Frenchman added the game winner two minutes shy of the 80th minute, launching a low strike into the bottom corner after the Saints had failed to clear a cross from Hazard.

Victor Moses was afforded four minutes of game time after replacing Hazard in the 86th minute, his 67th appearance as a substitute since he made his Premier League debut back in the 2009-2010 season.