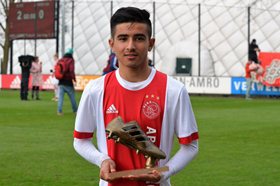 Manchester United are plotting a move for Ajax Amsterdam teen sensation Naci ünüvar, who has has drawn comparisons with Barcelona forward Lionel Messi.

According to Calciomercato, ünüvar put himself in the shop window during the 2018 edition of the prestigious Future Cup, scoring a brace in the final against Juventus.

He ended the tournament with five goals to win the Golden Boot, an award previously won by Liverpool's Nigerian winger Sheyi Ojo in 2014.

Manchester United have held talks with Naci ünüvar's parents but the youngster wishes to continue his development at Ajax Amsterdam for the time being.

United face competition from Serie A powerhouse Juventus for the services of the striker who will celebrate his 15th birthday in June.

He is a Netherlands U15 international and is eligible to represent Turkey through his father.