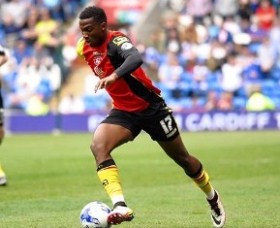 Allnigeriasoccer.com understands that Birmingham City loanee Viv Solomon-Otabor could depart the Championship strugglers in the summer transfer window as several teams are interested in his services.

The former Nigeria U23 invitee is on the radar of Premier League side West Ham, Leeds United and Derby County, and will consider joining one of these teams if Birmingham City agree to a sale.

Ex-Blues manager Harry Redknapp told a distraught Solomon-Otabor at the start of this season that he was not in his plans and sanctioned his loan move to Blackpool.

Charlton Athletic and Bolton Wanderers were among the teams that made enquiries over signing the winger before he chose Blackpool, where he was promised playing opportunities.

The 22-year-old has flourished since joining the Seasiders, playing 41 games (32 starts) from a possible 43 in the league and recording 5 goals while providing four assists.

Viv Solomon-Otabor's existing contract with Birmingham City will run out in June 2019.