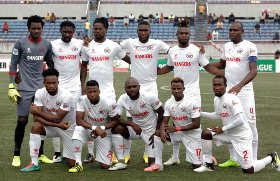 Super Eagles and ex-junior international attacking sensation, Uche Nwofor, who recently rejoined his former club, Rangers International F.C on a short term deal, has said that he was in the 'Coal City' outfit to help in winning the league shield again.

In an exclusive chat in Enugu, Friday, the very potent goal poacher who had stints with Holland Eredivisie sides, VVV-Venlo and S.C Heerenveen, Portuguese side, Boavista and other European sides like, Lierse S.K and A.S Trencin, said that he was privileged to have the opportunity to defend the colours of Rangers that gave him the break-through in his first stint with the club.

The all action centre-forward who was rated nearly one million Pounds at a point in his European career that spanned over seven years was full of praise for the reception he got both from management, coaches and players of the seven-time Nigerian league champions stressing, "Any day, Anytime, Rangers remains a great team that will always be after my heart. The reception from the management team, coaching team and my new team mates was heart warming. Sincerely, I will say that it is a privilege for me to be here and I shall do all I can to help Rangers emerge league champions again."

On how challenging it was for him to rejoin the team he last played in the2009/2010 Nigeria league season, Nwofor said, "There was not much difficulty in making up my mind to join Rangers even when there were pressures from some top sides in the Nigerian league to team up with them. Rangers remain one of the best organised clubs in Nigeria and like I said earlier, it will give me great joy to contribute my part positively towards helping the club become champions of the league again."

"The quality of coaching by coach Ogunbote and his assistants coupled with the quality of players in the fold gives me great assurances that we are ready to push for the league title this season," stated the attacker who cut his soccer teeth at the now defunct, Anambra Warriors F.C of Awka.

Nwofor who has ten senior national team caps with three goals to his credit and nine U-20 caps with six goals debuted for the Super Eagles at age eighteen years and five months under coach Lars Lagerback will most likely have his first start for the 'Flying Antelopes' in the re-scheduled Match Day 13 fixture with visiting MFM F.C of Lagos inside Nnamdi Azikiwe stadium, Enugu, midweek, April 25, 2018.