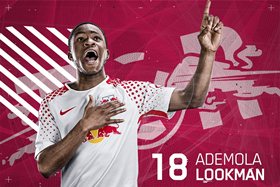 Nigeria Football Federation target Ademola Lookman hogged the headlines in Germany on Saturday afternoon for an awe-inspiring display, scoring a double for his loan club, RB Leipzig in their 4-1 win over Wolfsburg in their Bundesliga clash.

Another youngster courted by Nigeria, Felix Uduokhai, was on from start to finish for Die Wölfe in the cracker while former Flying Eagles wonder kid, Victor Osimhen was not listed in the visitors 18.

The Everton loanee opened the scoring at the Red Bull Arena after 24 minutes, sending a sizzling right-footer into the bottom corner after picking up a pass from teammate, Jean-Kévin Augustin.

The England U21 international would then notch a brace in the 52nd minute, prodding in another effort from the centre of the box off a Timo Werner's assist.

Lookman's loan spell with the Bulls have reaped much dividends, it must be said, with his latest string of goals taking his tally for Leipzig to four in ten appearances.

He would definitely be eyeing up more first team action if he joins up with the Tofees at the Goodison Park when his loan duration comes to a close at the end of this season.

Following the result, RB Leipzig are now placed sixth in the log with 50 points from 33 games while Wolfsburg continue to flirt with relegation, sitting in 16th.