...the complete Nigerian football portal
Subscribe
Arsenal Legend Kanu: Wenger Did Everything To Sign Me From Inter Milan
Published: May 07, 2018 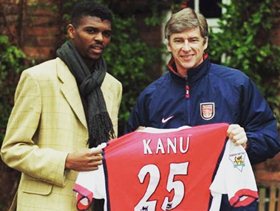 Arsenal and Nigeria legend Nwankwo Kanu was at the Emirates Stadium on Sunday, May 6 for Arsene Wenger's final home game in charge of the Gunners and has paid his respects to the iconic Frenchman.

Kanu found first-team opportunities limited following the arrival of Ronaldo from Barcelona and managed to convince the then Inter Milan supremo Massimo Moratti to accept a bid from Arsenal in February 1999 and the striker also acknowledged that Wenger worked behind the scenes to make the move happen.

''He’s been like a father figure for all of us. For me, when I was at Inter Milan he did everything to try to get me to Arsenal for six months. That’s the kind of person you want to be and want to support,'' Kanu told Arsenal player, according to arsenal.com.

"At the time, nobody believed in me. They were like, ‘You’re coming out from hospital, can you play football?’ But he believed in me and when I came here, I didn’t disappoint him. That’s why I’m here today.''

The former Gunners number 25 added : ''I love [the celebrations of him at the Emirates]. It’s a very good show of respect. I’ve seen a lot of people wearing red saying ‘Merci Arsène’.

"After the game, nobody left their seat. They’re all here to support him, say goodbye and thank him for all that he has done for the club."

Wenger won ten trophies for Arsenal and Kanu helped him achieve success as he was part of the squads that won the Premier League titles in 2002 and 2004 and two FA Cups.