...the complete Nigerian football portal
Subscribe
'He Was Trying To Clear': Rotherham Manager Won't Blame Ihiekwe For OG
Published: May 12, 2018 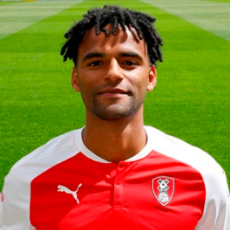 Rotherham United manager, Paul Warne has refused to blame Nigerian defender, Michael Ihiekwe for his unfortunate own goal in The Millers 2-2 draw with Scunthorpe in their League One semifinal playoff game at the Glanford Park.
Scunthorpe and Rotherham squared off on Saturday in the battle for Championship promotion after finishing fourth and fifth respectively in League One, and while goals from Jon Taylor and Joe Newell looked enough to secure the victory for the visitors, a fortuitous own goal from the Nigerian and a late strike from Cameron McGeehan denied them a first leg victory.

But Warne would not blame the Liverpool-born defender though, admitting that he was only trying to clear before inadvertently putting through his own net in the 18th minute.


"In fairness to Michael, he was trying to clear it. I've watched it back and it looks like it was going wide, but he was trying to do the right thing and I'll not criticise him for that, as he was excellent today. It's just bobbled off his shin",  Warne told reporters post-match.
The players of Nigerian descent who featured in action for both sides during the encounter were Scunthorpe's duo of Hope Adelakun and Funso Ojo while Scunthorpe called on the services of Joshua Emmanuel, Ihiekwe and former Arsenal starlet, Semi Ajayi.


Both sides would return to the New York stadium on Wednesday in search of a victory which would be enough to guarantee promotion.
Emmanuel Chinaza
Photo Credit : themillers.co.uk