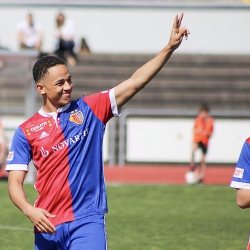 Switzerland youth international of Nigerian descent Noah Okafor made his professional debut for FC Basel as they were held to a 2-2 draw by FC Luzern in an entertaining game at St. Jakob-Park on Saturday evening.
The 17-year-old left winger was an unused substitute in matches against Lausanne-Sport, Grasshopper, FC Sion and FC Zürich in the Super League before finally pulling on a Basel jersey with the number eleven at its back following his introduction in the 34th minute.
Okafor was one of Basel's most outstanding players in the 2017-18 UEFA Youth League, scoring two goals and providing four assists in six matches and tallied 8 goals in 12 matches in the U18 League prior to his promotion to the first team in January 2018.
He was lively in his first competitive game for the 20-time Swiss champions but failed to put away two chances he had in the 82nd and 88th minutes.
Okafor is ending the season on a high as he made his full debut for Switzerland U18s ten days ago in a friendly against Italy.
Elyounoussi, who was replaced by Okafor, and Albian Ajeti were on target for FC Basel, while Luzern duo Schulz and Schürpf opened and closed the scoring.
Ifeanyi Emmanuel
Photo Credit : twitter.com/noah_okafor