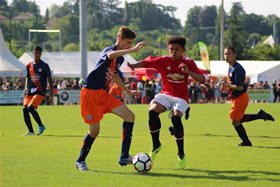 Skillful Nigerian winger Shola Shoretire is presently in France with Manchester United youth team for the Tournoi International De Football U15.
United lost 1-0 to Montpellier in their opening game of the tournament and will trade tackles with Dijon FCO and FC Bourgoin in their two remaining Group D fixtures.
Marseille, Atletico Madrid, Paris Saint-Germain, HJK Helsinki, OGC Nice and FC Porto are some of the teams participating in the tourney.
Shoretire was one of the most outstanding players at the prestigious Mediterranean International Cup in March and was in the Red Devils traveling party to Singapore for the 2018 JSSL Singapore Professional Academies 7s held last month.
He primarily represents the U14 team of the Old Trafford outfit but has been invited to train with the U15 and U16 squads several times in the 2017-2018 season.
No player of Nigerian descent has featured for Manchester United since the formation of the Premier League in 1992.
Ifeanyi Emmanuel
Photo Credit : twitter.com/NewManUtdNews