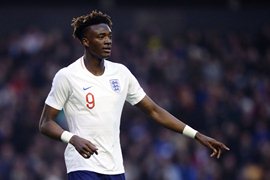 England kicked off their bid to retain the Toulon Tournament honours with a comeback 2-1 victory over China, with Nigerian Federation target, Tammy Abraham putting in a sensational showing with an assist while also popping up with a late winner for Aidy Boothroyd's U-21 side on Saturday afternoon.


The Chelsea striker who was one of the three NFF courted starlets in the team started for the young Three Lions at the Stade de Lattre alongside his Blues teammate, Fikayo Tomori while Manchester City's Lukas Nmecha was not afforded game time from the bench throughout the game.
Liverpool midfielder, Ovie Ejaria earlier pulled out of the squad due to injury.
Having fallen behind to a Yan Dinghao's 20th minute opener, the young Three Lions came flying out of the blocks after the recess, courtesy of Abraham who beautifully nodded down the ball across goal for his teammate, Dael Fry to attack and head home.

And it was soon time for the striker to cap off an emphatic outing with the winner in the last minute, rattling in from a spectacular shot to give his side all three points in their first group game of the competition.

Defender Tomori made way for Kyle Walker-Peters after 44 minutes of action while the dazzling Abraham went the entirety of the encounter.


England are aiming to win the youth competition for a third year running after winning the two previous editions and up next on their agenda on Tuesday, 29th is a date with Mexico before clashing with Qatar.
Emmanuel Chinaza
Photo Credit : chelseafc.com