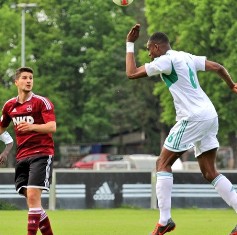 Rotherham United's Nigerian contingent of Michael Ihiekwe, Joshua Emmanuel, Semi Ajayi and Joshua Kayode would be playing in the Sky Bet Championship next season after beating Shrewsbury Town 2-1 in the final of the League One play-offs at Wembley on Sunday evening.
While the duo of Ihiekwe and teenage starlet, Kayode were not in action for the Millers in the decider, former Arsenal youth-teamer, Semi Ajayi and Joshua Emmanuel went the distance for the team.
Ajayi and Emmanuel were one of the most important players for the club who finished fourth in League One last term, playing 38 and 34 times respectively for the club, with the former scoring four goals.

Ihiekwe on his part, played 33 games scoring once while Kayode who put pen to paper for his first professional contract with the club in November last year is yet to be handed his league debut.

The three first teamers were involved for the promoted club in their semifinal double-headers against Scunthorpe which saw them best their rivals 4-2 on aggregate over both legs to move into the final.

A Richard Wood' double either side of Alex Rodman's effort for Town ensured Paul Warne's side edged the tightly contested encounter which lingered into extra time to return to the second tier of English football.