...the complete Nigerian football portal
Subscribe
What The Super Eagles Are Saying Ahead Of Friendly; Alli Named In England Starting XI
Published: June 02, 2018 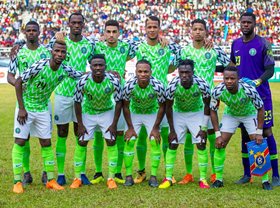 Super Eagles players took to social media to express their thoughts ahead of the eagerly anticipated international friendly against England at Wembley on Saturday evening.
Top Nigeria stars with Premier League experience in the shape of Obi Mikel, Victor Moses, Odion Ighalo and Alex Iwobi are confirmed to be in the starting lineup and the friendly will provide a true test of their readiness for the World Cup, which will see them face two-time world champions Argentina, Croatia and Iceland in the group stage.
Elderson Echiejile tweeted : ''Eyes on the prize #gameday #supereagles #soareaglessoar #eue3''.
Right-back Abdullahi Shehu said : ''We are Proud! We are United! We are Naija! #NaijaAllTheWay 🇳🇬🦅💚''.
Oghenekaro Etebo who has been named among the substitutes stated : ''Tonight we will soar over Wembley 🦅 🇳🇬 #EK #Roadtotheworldcup''.
Leicester City's Ahmed Musa posted on Instagram : ''36 States, 774 Local government areas, more than 520 different languages, and over 250 ethnic groups, yet united by one thing....the Naija spirit!!