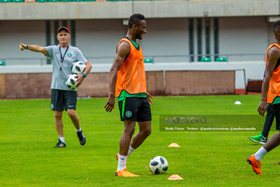 Former Chelsea ace John Obi Mikel took a swipe at England boss Gareth Southgate in the wake of the Super Eagles 2-1 loss to the Three Lions on Saturday, saying he employed negative tactics.
Southgate deployed a 3-5-2 formation against Nigeria, with Gary Cahill, John Stones and Kyle Walker the central defenders, while Ashley Young and Kieran Trippier were the wing-backs.
''We played against a team with five in the back. They always have an extra man,'' Obi Mikel told reporters in the mixed-zone.
''How do you play against a team with five in the back? It is always difficult but I think in the second half we played with five in the back as well to try and match them and that's what we did.
''We played much better, we created chances and we scored the goal. We know we can play better, we have to be playing this way.
''We need to be together, we need to be strong as a team.''
Gary Cahill thumped in a header to give the hosts the lead after six minutes, captain Kane doubled the advantage on 39 minutes, before Alex Iwobi halved the deficit one minute after the restart.
Ifeanyi Emmanuel