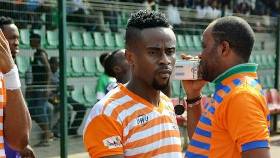 Dimgba Stanley Sopuruchi and Ojo Mine have expressed optimum delight and satisfaction after getting their entitlements from relegation battlers Sunshine Stars of Akure.
The players were owed backlog of wages while representing the Akure based outfit and required the intervention of the League Management Company for the players to smile to the bank again after a long wait.
After receiving the balance of the payment which was paid two folds, the players who could not hide their satisfaction and joy showered encomiums on LMC chairman Shehu Dikko, Chief Operating Officer, Salihu Abubakar , Nduka Irabor and others for their roles in bringing smiles to their faces.


Ojo Mine who is recuperating from the injury he sustained while playing for Sunshine stars said : "I must confess I got so much support from LMC and my intermediary Mr. Ogbemudia Endurance Iseri in this my trying time.
''I've received my entitlements owed me by Sunshine, though a lot of debts are waiting for these funds because I have to survive since I was just recovering from some set back".
Dimgba added : '' When I remember the treatment I got from Warri Wolves FC where they still owe me over N6m from 2013-2015, I never believed that I could still get what Sunshine owed me, but my Intermediary Mr. Ogbemudia kept assuring me that LMC management were very serious with my case that I should be patient, though this issue started since December 2016, but this is a happy ending.
''I'm so excited that with LMC intervention I got my entitlements from Sunshine FC, many clubs in the NPFL know the LMC is very serious on issue relating to our welfare now, I don't think anyone will want to pass through the same thing.
''Sunshine FC paid dearly for owing, some of their  players license were withdrawn, playing with only 11 players and club not being allowed to transfer players, I hope other clubs will learn to do the needful so as to avoid such.''

The players' Intermediary Mr Ogbemudia Endurance Iseri on his part said : "To God alone be all the glory, my boys have said it all. Personally my confidence level in the management of LMC just increased, but sure we will still criticize them when they err, with that they will continually assess their operations, and give us the best of league football organization''.