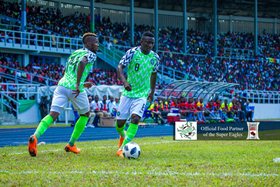 Allnigeriasoccer.com understands that Stoke City fans will have to wait until mid-July before they see in flesh and blood their new Nigerian signing Oghenekaro Etebo.
The Super Eagles number eight is currently holidaying in his homeland after representing the country at the 2018 World Cup, and has been granted permission by the Stoke City hierarchy to rest for two weeks before joining his new teammates for preseason preparations.
If Etebo is in good physical condition when he reports for preseason, the earliest date he can make his unofficial debut for the Potters is July 14 when they take on Walsall F.C in a friendly at the Banks's Stadium, however, the next fixture vs Bochum on July 18 looks more realistic.
Gary Rowett's side will also face Meppen, Hamburg, Wolverhampton Wanderers and St. Pauli in friendly matches before their opening day fixture in the Championship against Leeds United.

Etebo was hugely popular during his loan spell with Spanish outfit Las Palmas but passed up the opportunity to join the Canary Islands based team on a permanent basis after they were demoted to the Segunda División at the end of last season.
The former Warri Wolves star has not been handed a jersey number yet by Stoke City.
Ifeanyi Emmanuel