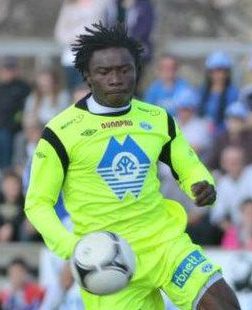 Nigerian striker Daniel Chima returned to scoring ways as Molde hammered Valerenga 5-1 in the Norwegian Premier League on Sunday evening.
The 27-year-old last netted in the Eliteserien against IK Start on May 27, before today's meeting at the Aker Stadion (Molde).
It is worthy to mention again that Manchester United and Juventus scouts attended today's game, Norwegian journalist Vegard Fl. Vaagbo has also confirmed the presence of an Arsenal talent spotter at the stadium.
It has been suggested that the scouts came to watch the talented 17-year-old Molde striker Erling Braut Håland, who took his tally to six goals in two matches with his brace against Valerenga.
Chima, who started on the bench, replaced Håland in the 69th minute and it took him only two minutes before he increased Molde's lead to 5-1.
With the highly coveted Håland set to represent Norway at the upcoming 2018 UEFA European Under-19 Championship in Finland, it is thought that Chima will get more playing opportunities after he was omitted from the starting lineup in Molde's last two league matches.
The former Legia Warsaw and Shanghai Shenxin man has scored five goals in all competitions so far this season.
Ifeanyi Emmanuel