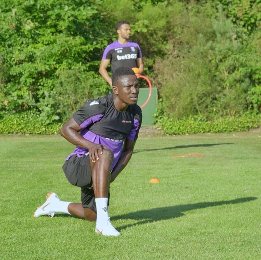 Speaking to the official website of Stoke City, Oghenekaro Etebo has revealed that he turned down the chance to join English Premier League clubs in favour of penning a deal with Stoke City this summer.
The versatile midfielder has linked up with his new teammates at the Potters and is line to make his unofficial debut at their training camp in Germany this week when they face Bochum, Meppen and Hamburg in friendly matches.
''I had a lot of options this summer from the Premier League, but I signed this deal before I went to the World Cup, and I am happy with that,'' Etebo stated.

''I did that because of the relationship and the conversations I had. I was happy with what was said - if I wasn’t then I wouldn’t have come to Stoke City.”

''I believe that we are going to make this a great season. I am going to give my best and hopefully that will be enough for the Club.''
Though Etebo and Stoke City have not revealed the identities of the clubs interested in the player's services, allnigeriasoccer.com can exclusively report that Watford had expressed the most concrete interest in signing the Nigeria international.
And he would have been at the Hornets not the Potters but the Vicarage Stadium outfit did not guarantee him playing opportunities in the new season and the contract offered offered to him by the Premier League side was nothing to write home about.
Stoke City offered Etebo better wages than Watford and they assured him that he will play for their first team.
Ifeanyi Emmanuel