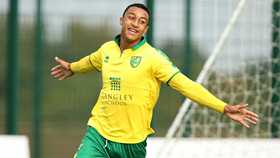 Precocious Norwich City Nigerian teenage striker, Adam Idah grabbed the headlines yet again on Tuesday after helping himself to four of his side's goals in a 6-0 trouncing of Borussia Dortmund II at the Schwansbell Stadium.

Idah, 17, was one of the two players of Nigerian descent in his side's starting XI, the other been defender, Timi Odusina and the duo were impressive during their run-outs.

The striker particularly put in a sensational showing for the Canaries, opening scoring from the spot just five minutes into the match before waltzing through the Dortmund defence to feed teammate, Payne who then set up Spyrou to score.

His best was even yet to come though as he scored four minutes to the break and then added two more afterwards, the pick of his efforts arguably his last to make it 6-0 when he took on the opposition defenders, outwitting them in style before dispatching with aplomb.

Both players were promoted to the U23s last season despite their tender years and they will not be short of suitors who will be willing to offer them first team football.


At the end of last campaign, the talented striker, who has been compared to Sweden legend Zlatan Ibrahimovic, made a clean sweep of the club's annual awards, taking home both the U18 Player Of The Year and Academy Player Of The Year.
Emmanuel Chinaza
Photo Credit : canaries.co.uk