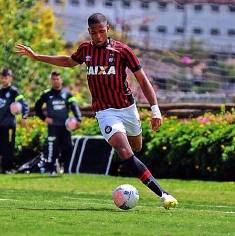 Nigerian-Brazilian striker Dominic Uzoukwu was on target for Beijing BG in their 2-1 home loss to Dalian Transcendence in the Chinese League One on Thursday afternoon.
Uzoukwu's close-range goal in the fifth minute off an assist from Wang Jianwen took his tally for the season to six goals from 13 matches.
The 23-year-old has been on the score-sheet against five different teams in the league following his move to Beijing BG in the January transfer window.
His first goal came on his competitive debut against Zhejiang Yiteng in March, while Shenzhen, Zhejiang Greentown, Nei Mongol Zhongyou FC and Dalian Transcendence are the other clubs against whom he has scored.
Despite Uzoukwu's goal today, Beijing BG walked away from the Beijing Olympic Sports Centre Stadium with no points in the bag after conceding two goals scored by Xie Zhaoyu and Rafael Silva.
Though the São Paulo-born attacker has close ties to Brazil, he has stated that he will not turn down the chance to represent the Super Eagles if approached by the Nigeria Football Federation.
Ifeanyi Emmanuel