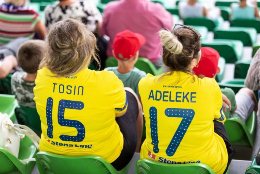 Allnigeriasoccer.com understands that at least five European clubs will be present at Matmut Atlantique for tonight's eagerly anticipated Europa League qualifier between Bordeaux and their Latvian opponents Ventspils.
It is confirmed that Austrian Bundesliga side Altach, Danish Superliga team Brondby, and Ligue 1 duo Strasbourg and Toulouse, plus German outfit Freiburg have requested for tickets for the match.
The aforementioned teams have been instructed to run the rule over the young Nigerian duo Adeleke Akinyemi and Tosin Aiyegun, with a view to a transfer in the summer transfer window.
The 19-year-old Akinyemi has scored 19 goals in all competitions this season, including six in the Europa League qualifiers, while midfielder Aiyegun has tallied 5 goals and that's probably why several teams are interested in signing the two youngsters.
If the two players live up to expectations against Bordeaux, they will increase their chances of being invited to one of the national teams in the near future as Super Eagles coach Gernot Rohr is expected to be among the spectators on Thursday.
Bordeaux won the first leg 1-0 thanks to Zaydou Youssouf's third minute strike.
Ifeanyi Emmanuel
Photo Credit : fkventspils.lv