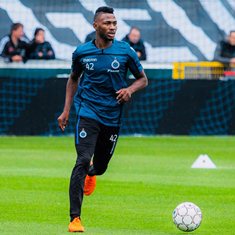 Belgian newspaper Het Laatste Nieuws has informed that scouts representing the aforementioned clubs were in attendance at the Stade Le Canonnier to run the rule over the players in action, with Club Brugge's Wesley Moraes understood to be the point of attraction.
However, the 20-year-old Bonaventure who started the day on the bench was introduced in place of Nigerian-born Netherlands U21 star Arnaut Danjuma after 76 minutes.

Bonaventure  first started out professionally with Ukrainian club FC Zorya Luhansk before transferring to the Blue and Blacks in 2017.

In his debut season with the club, the striker enjoyed success after featuring in 38 games and scoring 12 goals in all competitions


The former Nigeria U15 international is contracted to Club Brugge till 2021.
Emmanuel  Chinaza
Photo Credit : twitter.com/dennisblessed42