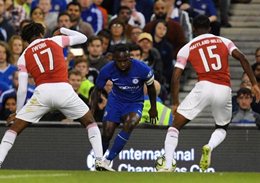 The Premier League plays home to players from all over the world. It’s a competition that has seen players from many different countries have an impact, with one of those countries being Nigeria.

There have been various Nigerians to have played in England’s top flight over the years such as Kanu, John Obi Mikel, Joseph Yobo and Jay-Jay Okocho, but which Nigerians are currently playing in the division and just how well are they doing?

After starting out at Crystal Palace, the Lagos born speedster moved to Wigan Athletic where he really made his name.

A move to Chelsea beckoned and after a slow start and loan spells as a winger, Antonio Conte’s decision to convert him into a right wing back proved to be a masterstroke in their title winning campaign of 16/17.

Moses quickly become a reliable right wingback option, with his pace and willingness to attack a key factor in him becoming a key member of the team.

New Chelsea boss Maurizio Sarri favoured a four-man defence at former club Napoli, so it will be interesting to see where Moses fits into his plans this season.

Wilfred Ndidi joined Premier League side Leicester City on the 3rd of December 2016 from Belgian side Genk in a deal said to be worth in the region of £15 million.

After arriving at the club, the 21-year-old quickly established himself as a first team regular in the defensive midfield role that was once owned by N’Golo Kante.

While many may see him as an up and coming player due to his age, he has already collected 20 caps for Nigeria.

In Ndidi’s first full season at Leicester he managed to make 33 appearances in the Premier League, with 38 in all competitions.

This coming season will be Claude Puel’s first full campaign in charge and you’d expect Ndidi to be integral to his plans.

If the defensive midfielder can have half the impact that Kante had in the Foxes’ midfield, it will serve him very well going forward.

Alex Iwobi, 22, came through the youth ranks at Arsenal after moving to England aged four.

He’s the nephew of footballing legend Jay-Jay Okocha, so he’s definitely got the pedigree, and now we’re starting to see more and more from the winger.

He made the breakthrough into the Arsenal first team picture back in 2015 and since then he’s made a total of 98 appearances, scoring 9 goals and setting up 18.

Iwobi has made 39 appearances for the last two seasons running in all competitions and will now be out to impress new boss Unai Emery to nail down a first team spot.

Sports sites and Betting.com in particular, already expect this young talent to be integral to any future success enjoyed by the Gunners.

There’s no doubting Iwobi’s talent, he just needs to be playing more consistently,  the 21 cap Nigeria international looks like he will be a part of Emery’s plans this season, having recently penned a new long-term contract.