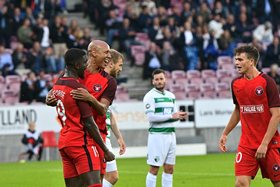 Catch up on the Nigerians who scored for their respective European clubs in the third qualifying round of the UEFA Europa League on Thursday, August 16th.
It was a one-sided affair at the Telia 5G -areena as Slovenian club, Olimpija ran out 4-1 winners on the night against Faith Obilor and Macauley Chrisantus's HJK Helsinki.

The visitors who earlier won the reverse fixture (3-0) killed off any lingering hopes their opponents were harbouring of a comeback in grand style following a rampant second half showing.

While Obilor went the distance for HJK, it was his teammate, Chrisantus who came off the bench in the 64th minute to grab a face-saving goal for the hosts when he headed home five minutes from time.

But elsewhere, Ayo Simon Okosun enjoyed better fortunes with his Danish Superliga side, Midtylland, scoring twice as they saw off The New Saints 3-1 at the MCH Arena.


The energetic box-to-box midfielder put The Wolves 2-1 up in the 62nd minute, a minute after entering into the fray, before completing his brace ten minutes from time, ending the tie 5-1 on aggregate.
Emmanuel Chinaza
Photo Credit : fcm.dk
Latest News