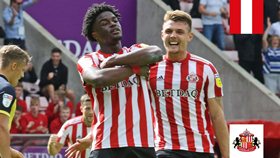 Catch up on the Nigerian players that were on target for their respective European clubs on Wednesday, August 22.
Noah Okafor was on target for Basel reserves in a 1. Liga Promotion game against Bavois which ended 2-1 in his side's favour.
The talented midfielder scored after 50 minutes to pull his side level at the Stade des Peupliers before

At the MEMS Priestfield Stadium in a League One game, it became four goals in four games for enterprising frontman, Joshua Maja who grabbed the final goal for Sunderland in a 4-1 win versus Gillingham.


Thus, he has now scored against all of the teams he has come up against in the division this term which includes Scunthorpe, Luton Town and Charlton Athletic.
Elsewhere, Swedish Suprettan side, Jönköpings Södra ran out 3-1 winners over Hudiksvall in their cup competition encounter, with young striker, Ahmad Gero joining his mates on the scoresheet.
After the visitors had fell behind to a 68th minute Cehan Sener opener, the 19-year-old kick-started a late onslaught at the Glysis Sparbanken Arena with a leveler in the 82nd minute before very late strikes from Tom Siwe and Amir Al-Ammari stole victory.


The goal was the first for the youngster who joined the club from Nigerian academy Ramcy Academy in January this year.
Emmanuel Chinaza
Photo Credit : safc.com