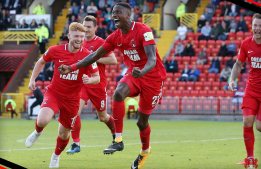 Catch up on the Nigerians who scored for their respective clubs in the English leagues on Saturday 25th.

We start at the Bloomfield Road where former England youth international of Nigerian descent, Nathan Delfouneso opened his goal account for Blackpool in a 1-1 draw with Accrington Stanley in a League One game.

The 27-year-old attacker connected with a looping cross from teammate, Jordan Thompson before firing in the opener after 66 minutes.

Elsewhere at the Gateshead International Stadium, a stoppage time goal from young defender, Marvin Ekpiteta secured a point for Leyton Orient following their 1-1 draw with Gateshead in a National League clash.

The Nigerian found himself in the box in the last minutes of the game and was able to guide home from McAnuff's corner with just two minutes remaining on the clock.

In yet another National League game, Boreham Wood came from behind 2-1 against FC Halifax Town to secure a vital second win of the campaign, thanks to a brace from striker, Joshua Umerah.


The Charlton Athletic loanee pulled his team level with a rocket of a shot after they had fallen behind before completing the turnaround from the spot in the dying embers of the match.
In the Scottish Premiership, former Nigeria U23 invitee, Uche Ikpeazu, scored his first goal in the league as Hearts beat Kilmarnock 1-0 at Rugby Park.
The striker's stunning header in the 81st minute secured all three points against Kilmarnock, who played with ten men for the last 22 minutes.
Emmanuel Chinaza
Photo Credit : leytonorient.com