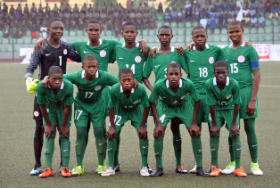 The Golden Eaglets of Nigeria were on Tuesday denied a chance to train under the floodlights at the training pitch of Stade Général Seyni Kountché.

The Manu Garba led team will face hosts Republic of Niger in the second semifinal match of the ongoing CAF U-17 AFCON qualifiers (WAFU B) by 7.30 pm on Wednesday.

The five-time world champions were scheduled to train under the floodlights prior to the match but were denied that chance as technicians in charge of the stadium were nowhere to be found.

Despite all efforts to frustrate the Eaglets, the team had a lightweight walkout for 30 minutes between 7.30 and 8pm local time, taking advantage of close by streetlights which were obviously not lit enough.

Meanwhile, Republic of Niger coach, ‎Francisco Castano Benito says he has seen Nigeria play and is confident his boys can stop them.

''I saw Nigeria play against Burkina Faso, they lost and playing against those teams such as Nigeria or Ghana is for us to go forward.

''They had a lot of difficulties against Burkina Faso, we saw them play, we will put in a strategy to enable us win the match. If we are able to do so, the truth will come out after the match.''

With five world titles, the Golden Eaglets are the most successful team in U17 World Cup history, while Niger reached the round of sixteen in their only appearance in 2017.
Ifeanyi Emmanuel