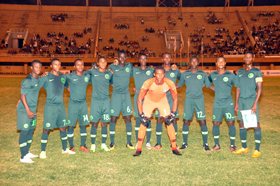 Nigeria set up a meeting with bitter rivals Ghana in the final of the African U17 Cup of Nations Zonal playoffs with a 2-1 win over hosts Niger Republic on Wednesday night.

The Golden Eaglets defeated their Niger counterparts 2-1 in a game they clearly deserved to win.

Goals from Akinkunmi Amoo and Olusegun Olakunle proved to be enough for the Manu Garba managed side to win in Niamey.

The dangerous Amoo saw his effort hit the woodwork as early as the seventh minute of play.

Four minutes later, Amoo's close-range effort from a one on one was saved by the Niger goalkeeper.

Nigeria goalkeeper John Amah was called into the thick of the action on the half hour when he denied Niger from close range.

The Golden Eaglets drew the curtain raiser in the 44th minute.

In the 58th minute, Olakunle curled in a brilliant effort to make it 2-0 in favour of the Eaglets.

With a minute left on the clock, Niger reduced the deficit.

That didn't stop the Eaglets from seeing out the remainder of the game as they qualified to play in the final of the competition.