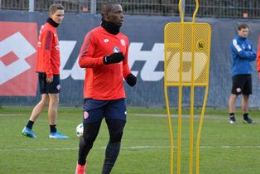 According to the official website of the German Bundesliga, a new Bundesliga record was set on match day three after 13 goals were scored by substitute players, beating the old mark of eleven goals set in the second round of the 2016-17 campaign.
Nigeria international Anthony Ujah helped set the record after he came off the bench to score in his second consecutive game in the Bundesliga.
In fact, all the three goals scored in Mainz's 2-1 win over Augsburg were from substitutes, Dong-Won Ji giving the visitors the lead, before strikes from Ujah and Alexandru Maxim.
Of the 21 goals scored by substitutes in the Bundesliga this season, twenty different players have found the net and only Ujah has scored twice.
The Mainz striker scored against Stuttgart on Matchday one nine minutes after his introduction in a 1-0 win, and against Augsburg, he netted 14 minutes after coming off the bench to make it 1-1.
Ujah has spent only 40 minutes on the pitch in the new season but is the leading scorer for Mainz in the Bundesliga.
Ifeanyi Emmanuel