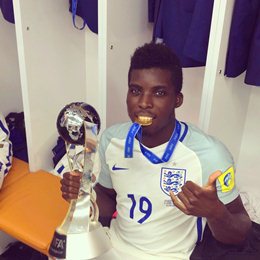 Sheyi Ojo's latest comments about his international future will spark a tug-of-war between the Nigerian Federation and the English Football Association for his services, with the winger refusing to rule out playing for the three-time African champions if handed a call-up by manager Gernot Rohr.
Born in Hemel Hempstead, Ojo is provisionally cap-tied to England, having played competitively for the U19s, U20s and U21s teams, and remains on the radar of the English FA ahead of next summer's important European U21 Championship.
''To be honest, I don't know much about it (Nigeria interest), but if they call me I'd be honoured to go to Nigeria," Ojo told BBC Sport.
"It's obviously a massive nation. I'm just really focused on club football at the moment, but I'm excited for the future, both club and country.

"My parents are originally from Nigeria as well, so they know a lot about it. They've always been keen on the idea [to represent Nigeria] but so far I've mainly been focusing on club football.

"It's starting to get to the time where I have to start thinking about my future. And of course, if Nigeria were to call me now it would be an honour."
Former Nigeria U23 coach, Samson Siasia had considered naming Ojo on his roster for the 2016 Olympic Games which didn't happen because it would have taken a long time to process the request for a change of association.
Ojo added : ''Of course, if I was to get selected I'd definitely think about it, I'd never turn down Nigeria.
"I'm from Nigeria originally so it'd be an honour, likewise with England as well. If I keep doing well, opportunities will come by for club and country.

"It's not really something I'm thinking about at the moment but you never know what could happen in the future."
Ojo was an impact substitute as England won the FIFA U20 World Cup in South Korea last year, making five appearances, including the final match against Venezuela.
Igho Kingsley
Photo Credit : twitter.com/sheyi_ojo