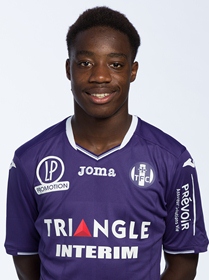 Toulouse wonderkid of Nigerian descent, Temitope Akinjogunla will fancy his chances of making his professional debut for the French Ligue 1 club in the coming years after his recent promotion, allnigeriasoccer.com reports.
Born in Haute-Garonne, Toulouse, Akinjogunla is considered one of the finest young defenders at Toulouse Academy and was promoted to their U19 team ahead of the 2018-2019 season.
The 15-year-old is not a bit part player for the Toulouse U19s despite his tender years as he is one of the first names on their team sheet, having started recent games against AS Saint-Etienne and AS Monaco.
If he continues impressing for the youth team as it is envisaged, he would follow in the footsteps of defensive-minded Toulouse Academy graduates Issa Diop, Moussa Sissoko and étienne Capoue who all made their first team debuts before moving to the English Premier League.
Akinjogunla has been on the books of Toulouse since August 2016 and had previously represented the youth teams of US Colomiers, Toulouse Fontaines Club and AS La Faourette, where he started his career.
The France U16 international played for Toulouse U17s last season and was part of the Toulouse U16 squad that won the prestigious Gothia Cup in Gothenburg, Sweden in 2017.
Ifeanyi Emmanuel
Photo Credit : tfc.info