...the complete Nigerian football portal
Subscribe
Talented Nigerian Youngster Kelechi Wants To Be One Of The Best In The World
Published: September 26, 2018 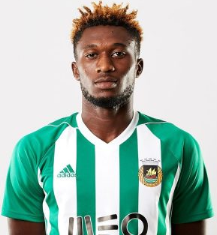 Portuguese-based footballer Kelechi John, 20, has told allnigeriasoccer.com from his base that he is working hard to develop his game in an attempt to be one of the best footballers the game has produced in recent times.
The player who is tied to a lengthy deal with Primeira Liga side Rio Ave spoke about his game and the massive improvement he has attained since joining from Nigerian Professional Football League side Plateau United two years ago.
"I was very young when I came over here and the football here was strange" Kelechi said.
"But I thank God I have been able to adjust and playing consistently in the lesser league.
''I am happy with my development and I believe with the right mentality I will be one of the best defenders in the world in the near future.''
Kelechi was in full 90 minutes for Rio Ave in the Liga Revelacao against Sporting Braga last weekend..