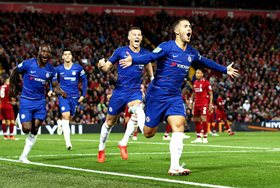 Allnigeriasoccer.com reviews the performances of Nigerian players in the third round of the League Cup on Wednesday, September 26.
We start off at Anfield, venue of the clash between two Premier League heavyweights, Liverpool and Chelsea.
The Blues came from behind to beat the Reds 2-1 thanks to goals from Emerson and Eden Hazard after Daniel Sturridge had given the home team the lead just before the hour mark.
Former Nigeria international Victor Moses played for ninety minutes in his first start of the season, former Chelsea boy Dominic Solanke watched proceedings from the bench for the entirety of the game. The winger was booked in injury time.
At the Emirates Stadium, a strong Arsenal squad defeated Brentford 3-1, with Alex Iwobi playing the full game.
Two first half goals from Danny Welbeck and a late strike from Alexandre Lacazette saw the Gunners progress to the next round.
Former Dream Team VI invitee Moses Odubajo was named in the visitors starting line-up, his first competitive match since May 2016, and subbed out in the 64th minute.
Over to the The City Ground in Nottingham, Super Eagles midfielder Oghenekaro Etebo was not in the Stoke City team that lost 3-2 to Nottingham Forest.
Forest opened the scoring through Ben Osborn in the 19th minute,  Daryl Murphy and Joe Lolley got the other two before the 50th minute.
Stoke's Benik Afobe pulled a goal back on the hour mark before Saido Berahino made it 3-2 with eight minutes remaining.
Isaac Success scored for the second straight game in the League Cup but it was not enough, with Watford losing 4-2 on penalties to Tottenham Hotspur after both teams were tied 2-2 at the end of ninety minutes.
The Hornets number 10 blasted the ball past goalkeeper Gazzaniga within 40 seconds of the restart to hand his team the lead, Dele Alli leveled matters from the spot on 82 minutes, then Lamela made it 2-1 before Capoue's late equalizer sent the game to penalties.
In the shootout, Success netted Watford's first penalty. Italian-Nigerian striker Stefano Okaka is still recovering from a minor complaint and was not in the match day squad. Luke Amos was not in Spurs 18.
Ifeanyi Emmanuel
Photo Credit : chelseafc.com