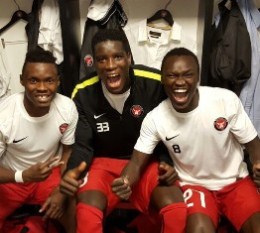 Rilwan Hassan is delighted to return to action for FC Midtjylland after eight months on the sidelines in yesterday's 2-1 win over Dalum IF in the third round of the Sydbank Pokalen.
The Nigerian winger came off the bench in the 77th minute as replacement for Evander, his first game for FCM since December 11, 2017, after recovering from a muscular injury.
''It feels good to be back because I have been training with the team for a while, and now I'm finally back. I'm really glad,'' says Rilwan Hassan to fcm.dk.

"I had two big chances, but the keeper was in a good position to save one, and the other hit the post.''
Hassan was in the FC Midtjylland side that first won the Danish Superliga in 2015 and hopes they can retain the title this season.
''I'll take it step by step so I can get fit. I will do all I can to become part of the team and win the Super League again,'' added the wing wizard.
Hassan has featured in 245 matches for FCM since his arrival at the club, scoring 25 goals and providing 42 assists.
Igho Kingsley
Latest News