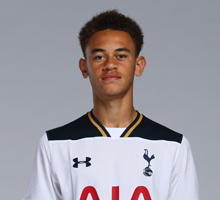 Nigerian midfielder Luke Amos could be out for the rest of the season after suffering an injury while representing Tottenham Hotspur's U23 team in a Premier League 2 match last Friday.
Amos had to be substituted after 21 minutes against Blackburn Rovers and latest reports suggest he faces a long spell on the sidelines.
Allnigeriasoccer.com contacted Spurs expert Lilywhite_Rose for an update on the central midfielder and he has revealed that the injury suffered by the former England U18 star will have long-term consequences as the player will be out for the entire season after damaging his knee ligament.
Tottenham Hotspur manager, Mauricio Pochettino, has now lost four midfielders to an injury crisis, with Mousa Dembele, Dele Alli and Christian Eriksen ruled out of tomorrow's Champions League clash with Barcelona.
It was believed that Amos's first team breakthrough was imminent after starring for Tottenham in pre-season, the highly-rated youngster has been included in two match day squads for Premier League games this season.
Last month, he was in Spurs traveling party for their Champions League Group B opener against Inter Milan.
Hertfordshire-born Amos joined Tottenham Hotspur Academy in 2006 from Ware Youth.
Ifeanyi Emmanuel
Photo Credit : tottenhamhotspur.com