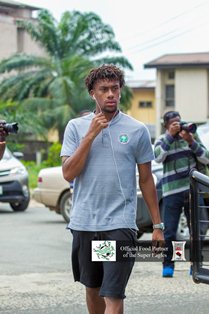 Former Arsenal winger Robert Pires has revealed that he spoke glowingly with Super Eagles star Alex Iwobi after his game changing performance against Watford in the English Premier League on Saturday.

Iwobi came off the bench in place of contract rebel Aaron Ramsey and played a huge role in the Gunners' 2-0 win over the Hornets.


"I know just one thing, I told him after the game he made the difference,. He's a great player, very very fast," onetime French international Pires told Standard Sport.
"He finds good solutions on the field with his vision. He has good mentality and spirit. Of course, he's young but he's learning very quickly.

"Arsenal with Alex Iwobi and Alex Iwobi with Arsenal have a good future," the former Arsenal star who was part of the Invisible side that went the whole season unbeaten in 2004 enthused.

Iwobi, who has been named in Nigeria's roster for the 2019 Africa Cup of Nations qualifiers against Libya revealed after the 2-0 victory over Watford that Emery has told him to stop being 'so critical' about his own performances.

"I'm more positive and more confident with the ball," the 22-year-old had told the media.

"The boss has basically told me that if something doesn't work, just keep going and don't dwell on it.

Meanwhile some Arsenal fans are of the opinion that Iwobi could be in trouble with his head coach Unai Emery after ignoring a rule the former Sevilla and PSG head coach has enforced.

The Gunners boss introduced a new set of dietary regime at the start of the season as part of a major fitness shake-up.

The midfielder uploaded a video to his Instagram story, of him enjoying his lunch.

And some fans think he had a big glass of apple juice with his meal.

According to The Mirror, a fan on social media platform, Reddit, posted the video alongside the caption: "Iwobi is testing Emery here."

"That better be freshly pressed apple juice or he's in trouble for disrespecting the boss," another fan stated.

But others had more lenient views.

"I prefer this form of rebellion than turning up late to training."

And a fourth suggested: "I think Emery has only banned 'packaged' apple juice because those items contain a lot of added sugar."

Iwobi has made six appearances in all competitions this season scoring twice and getting two assists.

The Gunners continue their Europa League campaign on Thursday evening with a trip to Azerbaijan to face Qarabag, a game the Nigerian is expected to play in.

The North London side will return to the Premier League and make the short trip across London to face promoted side Fulham on Sunday.