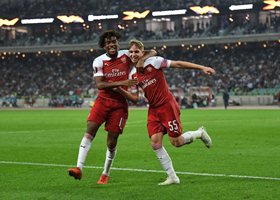 Super Eagles forward Alex Iwobi was in action for 70 minutes as Arsenal defeated Azerbaijan side Qarabag in 3-0 their second Group E UEFA Europa League game in Baku on Thursday night.


Iwobi was replaced by Alexandre Lacazette and the Nigerian's performance was rated by some of the English media who covered the game.
London based website, Football.London rated Iwobi highly following his contributions to the Gunners victory.
"Alex Iwobi"

"Another excellent display from a man in real form. Iwobi is brimming with confidence right now and you can see that out on the pitch. He's running at players, showing plenty of trickery and is a constant threat. He has to start against Fulham. 8."

Iwobi was surely the best player on the pitch. His hold up play was brilliant and he linked up well with Kolasinac down the left channel. He also provided a key assist for the second goal," the website noted.

However the rave reviews did not go smooth sailing for the player who makes a return to the Nigerian squad for the double-header in the 2019 Africa Cup qualifiers against Libya on October 13 and 16.

According to Sportskeeda.com, the Arsenal star was barely average in the game:

"The way he set up Smith Rowe for his goal was amazing. But Iwobi for 90 minutes has still a lot to prove. He loses the ball too often to frustrate the manager."

Iwobi is line to feature for the Gunners in Sunday's English Premier League clash against Fulham.