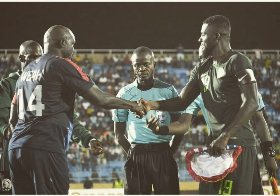 Super Eagles fans have voiced their displeasure that manager Gernot Rohr keeps inviting Hapoel Beer Sheva's John Ogu to the national team without the midfielder getting game time.
Ogu has professionally refused to vent his anger on the German football tactician, albeit publicly, saying he respects the decision of the coach and spoke about the quality players ahead of him in the pecking order of defensive midfielders.
Considering the fact that caps will not be awarded for the friendly against Liberia and the World Cup qualifier against Algeria in November 2017, Ogu has started only two matches for the Super Eagles, against Argentina and Czech Republic in friendly matches, from a possible nineteen since the appointment of Rohr.
Speaking on Naija Made, SuperSport, Ogu said : ''I see Nigerians complaints but the thing is I am a football player who always respects the manager's decision. I just try to focus on my work and try to do my best.
We have so many quality players and if I get the chance I always do my best. I'll just keep working hard, that's what I believe in.
''I am playing regularly in my team, I am fit, I think I can help the Super Eagles if I am given the chance.
''Like I said, I respect the manager's decision, I'll keep working hard. I want the fans to keep supporting, keep praying for the country.''
Ogu also discussed about the upcoming 2019 Africa Cup of Nations double-header against Libya and he has said that the Super Eagles are motivated to get six points from the two games.
''Nobody wants to joke with this game or any game in the national team. This is like a big game for us, we need to win both games so as to qualify for the Nations Cup.
''We want to be in the Nations Cup come next year, so we are looking forward to the game, everyone is in good shape I guess. For me, I can't wait to step out onto the pitch if I am given the chance.
''Like I said, we are all looking forward to this game, it's really going to be a big game for us.''
The 30-year-old John Ogu made his debut for the Super Eagles against Kenya in a 2014 World Cup qualifier on March 23, 2013.
Ifeanyi Emmanuel