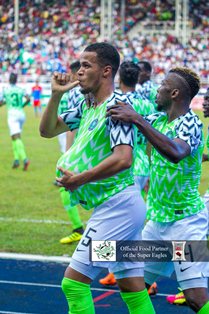 Udinese central defender William Troost-Ekong struggled, to put it mildly, in his team's 2-0 loss to Juventus in an Italian Serie A clash at Dacia Arena (Udine) on Saturday evening.
Ahead of next weekend's 2019 AFCON qualifier against Libya, Ekong is the only active Super Eagles central defender playing for a topflight club as Brighton's Leon Balogun, Leganes' Kenneth Omeruo and Porto's Chidozie Awaziem have not featured for their respective clubs since they returned from international duty last month.
The Udinese number five performance against the Italian champions left much to be desired in a personal duel with one of the best players on the planet, Cristiano Ronaldo and was close to scoring an own goal.
Troost-Ekong was culpable for the first goal scored by Bentancur before the Portugal international lashed home inside the far post to double Juventus' lead in the 37th minute.
In the players ratings by Eurosport Italia, the distracted Nigeria international was the least ranked Udinese player with a rating of five, same as Bram Nuytinck, Samir, Valon Behrami and Rolando Mandragora.
'' Bad on Juventus' first goal, bad on Mandzukic and Ronaldo's cuts. He read the key situations too late. 5,'' they wrote on Ekong.
The former Bursaspor star is expected to partner Leon Balogun, who is regarded as Nigeria's top defender, at the heart of the Super Eagles defense next Saturday in the Africa Cup of Nations qualifier vs Libya.
Ifeanyi Emmanuel