...the complete Nigerian football portal
Subscribe
Leon Balogun Is Happy To Play The Waiting Game At The AMEX
Published: October 08, 2018 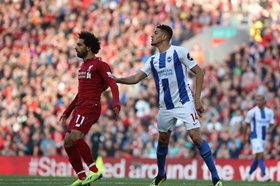 Nigerian defender Leon Balogun got his dream move to the Premier League this summer, joining Brighton and Hove Albion from Mainz.

The 30-year old was hoping to become a regular in the English top flight but has played just 160 minutes so far.

It has been a frustrating spell for the former Hannover man but he is happy to bide his time and work hard in training as he bids to work his way back into Chris Hughton's plans.

Balogun was Brighton's first summer signing and arrived on a free transfer from the Bundesliga.

With the departure of Connor Goldson, the club were keen to strengthen their central defensive options and, following an impressive season in the German top flight, the Nigerian international fitted the bill.

With the partnership of Shane Duffy and Lewis Dunk flourishing during the club's first season in the Premier League, very few expected Balogun to walk straight into the starting XI and he has found it difficult to dislodge the duo thus far.

Balogun has featured twice for the Seagulls so far and many more opportunities will surely arrive, especially during the traditional hectic festive period in which the club will be forced to play eight times in the space of a month.

He has made two appearances so far but both have come against difficult opposition.

His first Premier League experience came against Manchester United at the AMEX and it was a memorable occasion for the hosts as they emerged 3-2 winners.

Lewis Dunk's injury after just twenty minutes paved the way for Balogun to come off the bench and he played 70 minutes alongside Shane Duffy.
He also admitted that he was surprised by the lack of speed and urgency in the opposition's build-up play.
His second outing came against Liverpool but he was unable to make a perfect two from two with the Reds emerging narrow 1-0 winners.
Balogun's only outings have come against two of the top sides in the division and it's been a tough start for the defender.

Both teams are regulars in the UEFA Champions League with Jurgen Klopp's side reaching the final of the competition in May.
They have been priced up as fifth-favourites at 7/1 in this season's outright betting with William Hill but Balogun and Brighton nullified their threat for the majority of the contest and that takes some doing.

Brighton face both Arsenal and Leicester in the next couple of months and Balogun will be hoping to come up against international team-mates Alex Iwobi and Kelechi Iheanacho.

Despite being born in Germany, the 30-year old qualifies for the Super Eagles through his father and he made three appearances for his country this summer in Russia, playing all 270 minutes in Group C.

He will be back on international duty in October when Gernot Rohr's side take on Libya in an African Cup of Nations qualifier.

His time at Brighton has been frustrating so far but Balogun has proved an able deputy in the Premier League when called upon.

He is unlikely to usurp Hughton's favoured centre-back partnership anytime soon but he must remain patient and take his opportunities when they finally arrive.