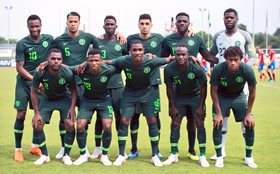 The recent political activities in the South South geopolitical zone is behind the Super Eagles travel woes ahead of their crucial Africa Cup of Nations qualifier against Libya.
The Nigeria Football Federation officially communicated to the twenty four invited players that they should be in camp latest Monday, October 8 but only four players Isaac Success, Troost-Ekong, Semi Ajayi and Daniel Akpeyi were sighted at the Ibom Hotel & Golf Resort, Uyo this morning.
Manager Gernot Rohr is worried about the players nonavailability but remains optimistic that he will have a full house by lunch time, with players to arrive from Abuja and Lagos, including Leicester City duo Wilfred Ndidi and Kelechi Iheanacho.
''It's been a challenge getting players into Uyo, there are some political activities. Those parties have bought up all the flight, the flight from Lagos and Abuja is once a day, so they bought up all the seats,'' Super Eagles Media Officer Toyin Ibitoye told allnigeriasoccer.com.
''Players are booked either Abuja-Uyo or Lagos-Uyo, we will have a full house before lunch time time today. By lunch time, we will have everybody in.
''The people from Abuja are already airborne now, about eight of them are coming in so they will join the four now, that is twelve.

''A lot of the other guys are also coming in from Lagos, Ogu, Ndidi and Iheanacho.
''Training will definitely be in the evening, the coach wants to see them first when they arrive in camp and he's sure that he has enough numbers.''
The Super Eagles training session on Tuesday will hold at the training pitch of the Godswill Akpabio International Stadium from 1700 hours.
Ifeanyi Emmanuel