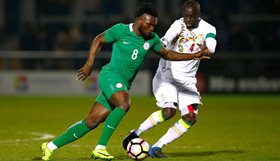 Bursaspor right back Abdullahi Shehu is backing the relatively new players in the Super Eagles to shine if they are called upon by manager Gernot Rohr for tomorrow's showdown against Libya.
Watford's Isaac Success and Paderborn’s Jamilu Collins are in contention to make their competitive debut for the national team and there could be home debuts for wingers Henry Onyekuru and Samuel Kalu.
The retirement of Victor Moses left a hole on the right side of the Super Eagles attack and Kalu got called up by Rohr, while left back Collins was invited due to the inactivity of free agent Elderson Echiejile.
''The new players are professionals and the national team is the national team,'' Kalu told ACL Sports
''It is not somewhere you come and say you need time to get yourself, No. I think the players know that also and if you watch our training and see how they play, they know what they are doing and I think they are ready also for it.''
Abdullahi Shehu has been recalled to the national team after recovering from an injury that kept him out of the squad against Seychelles and will compete with Ola Aina, Chidozie Awaziem, Kenneth Omeruo and Bryan Idowu for the right back role vs Libya.
Igho Kingsley