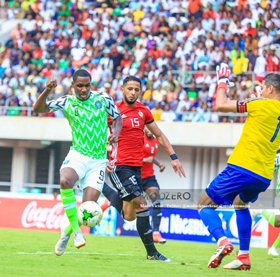 Allnigeriasoccer.com rates Nigeria players for their performances during the 3-2 win over Libya on Tuesday.
The Starters
Francis Uzoho 5/10 : Earning his 12th cap for Nigeria, Uzoho was jittery at times. He made some good saves too.

Ola Aina 5.5/10 : Ola put in a solid shift. Did well up against at the back, while always offering support to Kalu further up the pitch.

Jamilu Collins 5/10 : The left back improved as the game went on.

Leon Balogun 6/10 : Was solid enough for the Super Eagles.

Wilfred Ndidi 6.5/10 : He was the controller in midfield, and did a fine job up. Provided a link between the defence and attack, and moved the ball much quicker.


Oghenekaro Etebo 6/10 :The Stoke City star held his own in the middle of the park.
Alex Iwobi 7/10: Proved he has what it takes to play as an attacking midfielder. His performance should give him the confidence to become a permanent fixture at number 10.

Ahmed Musa 7.5/10 : Constant threat down the left wing, bamboozling the opposition on several occassions, Musa put the performance many were waiting for in an Eagles shirt. His skill set up the first goal, while he grabbed the second of the night.

Samuel Kalu 5/10 :Didn't have the same impact that Musa had on the opposite wing, but looked full of running on the right wing, and held the ball well.

Odion Ighalo 9/10 :Man of the match. Ighalo netted a brace showed many good touches and held the ball up well for his teammates.


John Ogu 5.5/10 : He made a few interceptions and covered well for his team.
Henry Onyekuru 6/10: Came on in the 80th minute and added more life to the attack. Almost scored but saw his effort go wide of the far post.
Semi Ajayi (N/A) : Cameo. Not enough minutes to be rated.
Abayomi Ademetan