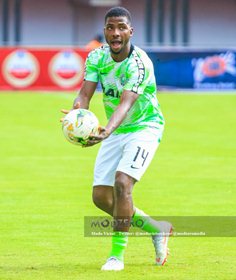 Leicester City striker Kelechi Iheanacho was snubbed by Super Eagles coach Gernot Rohr in the two recent games against Libya in the 2019 Africa Cup of Nations qualifiers.
Iheanacho did not get any minutes on the pitch because former Watford striker Odion Ighalo was in a rich vein of form and not as a result of fitness concerns, a Super Eagles insider has informed this website.
''You hardly change a winning team, somehow Ighalo had one of his best games for Nigeria against the Libyans, he scored a hat-trick and almost scored a hat-trick in Tunisia, but he got two goals, '' the top source told allnigeriasoccer.com.

''It's not that Iheanacho is having an injury, he was not played for tactical reasons. Ighalo performed extraordinary.
''He scored ten minutes to go, what if he was replaced by Iheanacho? Sometimes the coach takes decisions and it clicks for him and people will start hailing him.

''The coach knows his players and knows when to make substitutions as and when due. He got the results everyone is looking for.''
Iheanacho started the AFCON qualifiers against South Africa and Seychelles but was substituted in both matches.
Ifeanyi Emmanuel