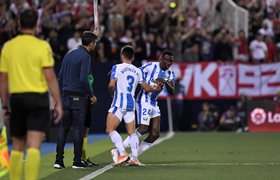 When it comes to deciding which club has the best pool of talent in the Premier League, one team we to mention is Chelsea.

From Hazard and Kante to Pedro and ex-Super Eagles star Victor Moses, it is simply no secret that the West London club has a wealth of quality at its disposal.

In fact, the club has such a large number of players that it has become common to see them loan out players season after season.

At present, the club is thought to have in the region of 40 players loaned to other teams.

Among them, of course, is Super Eagles star Kenneth Omeruo, who is currently playing for CD Leganes.

For most sides, loaning out so many players would be a problem as it would leave them short in numbers and quality.

However, Chelsea are currently flying high in the Premier League under the guidance of Maurizio Sarri.

According to Oddschecker, which is offering a range of free bet no deposit promotions, as of October 12th you could even get odds in the region of 9/1 on them lifting the Premier League trophy in May.

However, the club’s practice of seemingly ‘stockpiling’ talent has clearly raised eyebrows and may well be the reason why FIFA has been compelled to propose new rules on the loan system.

FIFA’s plans would mean clubs are only able to loan out a maximum of six players a season, a number which is significantly lower than Chelsea’s current loan figures.

According to the BBC, the proposals now need to be approved by other bodies including clubs, as well as league and player organizations.

The plans were put forward alongside other proposals to address the issue of agents and also boost regulation in relation to that area.

While it remains to be seen whether the new plans on loans will ultimately be given the green light, if they do it will certainly change the game for clubs like Chelsea.

Teams would have to carefully choose which players they want to loan out, as well as which may be better suited to staying at the club.

In addition, a call would also have to be made as to whether the time is right for certain players to move on.

It certainly raises lots of questions, not least in terms of what the future may hold for a player like Kenneth Omeruo.


A Nigerian international who is now 25 and has rarely had a glimpse of first-team action at Stamford Bridge, could the new plans mean that his time as a Chelsea player may soon come to an end? We will wait and see.
Igho Kingsley
Photo Credit : cdleganes.com