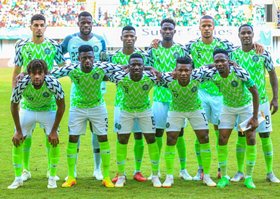 Things have gotten a bit tougher for Bafana Bafana after Nigeria beat Libya. The Nigerians took a big step after beating Libya 4-0 in a home qualifier.
If you are looking to use your Bet9ja promotion code, now might be the right time to do it!
In the first leg of the encounter, Odion Ighalo scored a hat-trick which led Nigeria to the top. It only took two minutes for the Nigerians to lead.
The first goal was brought down on a goal-bound by the Libyan goalkeeper. This prompted the intervention of the referee Jean-Jacques Ndala. Ighalo did not let his fans down when he converted the resultant kick into a goal.
Eight minutes later the Nigerians almost had another goal but their penalty pleas were ignored. Suddenly things seem to be in favour of the Libyans when Mohamed Abdussalam decided to go for a header. However, it was brilliantly saved by Francis Uzoho of the Super Eagles.
During the second period, the harvest for goals continued. In the 58th minute, the Nigerians capitalized on Libya's mistakes.
Ighalo scored the second goal after getting a pass from Alex Iwobi who took advantage of the careless pass from Ben Ali.
Ighalo completed his streak of goals after Ahmed Eltarbi had played around with Ahmed Musa's pass. He scored his third goal which can only be described as fine and simple.
Samuel Kalu decided to seal the fate of the Libyans when he scored the final fourth goal. This was thanks to an assist by Henry Onyekuru.

The hat trick which led the Nigerians to win was the first ever since Nnamdi Oduamdi performance at the 2013 Confederation Cup in Brazil.
This means Ighalo has a total of six goals in the AFCON 2019 cup. He is in the lead after scoring two more goals in the second leg with the Libyans.
This placed Nigerians in second place behind the South Africans. Bafana had just gotten their biggest international victory after beating Seychelles 6-0.
However, during the second leg match between the Libyans and the Nigerians, the Super Eagles got a vital 3-2 win.
The Nigerians scored the first two goals in the 14th and 18th minute. The final goal was scored during the 81st minute.
These goals took the Super Eagles to the top with now Bafana Bafana having to digest second place. These results can be attributed to the goalless match between Bafana Bafana and Seychelles.
The results currently stand at 9 points for the Nigerians, eight for Bafana Bafana and four points for the Libyans.
However, on November 16,  the second place will be determined when Libya meet Seychelles in an away game. While the South Africans have to be the underdogs of the match when they face the Nigerians.
It might seem as if the Super Eagles and Bafana Bafana will be the ones heading to the finals.
But the Libyans are resilient to ensure that they qualify for the finals especially since the match will be played at home. We just have to wait and see.
Igho Kingsley