...the complete Nigerian football portal
Subscribe
Omeruo Pleads With Chelsea : I Would Love To Play, Even If It's Just One Game
Published: October 23, 2018 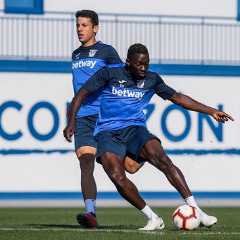 Close to seven years after Kenneth Omeruo's celebrated arrival at Chelsea, the Nigeria international has yet to make a competitive appearance for the Premier League powerhouse.
The former Sunshine Stars defender has been farmed out on loan to ADO Den Haag, Middlesbrough, Kasımpaşa, Alanyaspor and most recently Leganes despite being eligible for a UK work permit.
Omeruo has made a passionate appeal to Chelsea that he would love to play for the club even if it's for one game.
Speaking to BBC, Omeruo said : ''I've played in the English championship, I've gotten a feel of that but La Liga is very good.

"If I end up playing for Chelsea someday fine, because it is one of the biggest teams in the world and they have the highest fan base in Nigeria.

"I would love to play for them, even if it's just a game, but right now I am very happy with my life here in Spain."
Omeruo might not fulfill his ambition to play for Chelsea as Leganes have an option to sign him permanently at the end of his loan deal next summer.
Igho Kingsley
Photo Credit : cdleganes.com